Home » The Auckland Invasion: Lorde Reigns at the 2014 Grammys 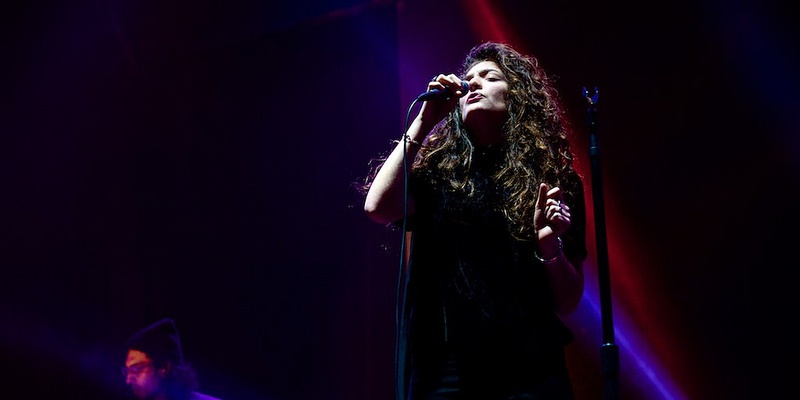 The youngest person in 25 years to hit the number one spot on the Billboard charts is a seventeen-year-old girl from New Zealand. Until last year she was a total unknown living in Aukland. Now she’s a superstar who just won the Grammys.

Her name is Lorde.

Born in Auckland, New Zealand, Lorde (real name Ella Yelich-O’Connor) is a singer and songwriter with a style that’s sort of an unpretentious mix of electronica, pop and art. Her song “Royals” held the top spot on the Billboard charts for nine weeks. She just won “Song of the Year” and “Best Pop Solo Performance” at the 2014 Grammy Awards beating the likes of Justin Timberlake, Bruno Mars and Katy Perry. Her music has been streamed hundreds of millions of times. Her song “Royals” alone has 169 million YouTube views. We’re talking pop star here. We’re talking big.

Twelve months ago she was totally unknown.

First of all, if you haven’t heard “Royals,” you need to check it out. It’s actually cool and has a great message. This girl is an artist. She is a breath of fresh air in a world of constructed identity and plastic celebrity. Sure she’s weird…but aren’t we all? I mean seriously, you can criticize anyone for anything—particularly for being different. But artists are different. That’s why they’re cool. That’s why we need them.

In a way, artists represent everything good about each of us. Every person in this world has profound value and a deep interestingness about them. There is a universe of genius within every single human on Earth. There are no boring people—only those too distracted or beaten down to believe in themselves and say what they really think.

People are unique. They’re beautiful. They have cool ideas, think awesome things and look at the world from their own totally original perspective. Like a photographer looking though his lens at the same world we all view and capturing what no one else sees, all people have their own sense of creative awesomeness that can be easy to overlook.

When you enter the world of another human being you suddenly discover the most incredible things about them. You find out they have gorgeous ideas and brilliant existences. Whether a cook, a carpenter or a kid, within every person is the innate ability to create something only they see…something awesome.

People have visions; they have goals. They’ve got goals. Perhaps they’ve forgotten them years ago or perhaps they negate them before they even have a chance to write them down. But they’re there.

This girl’s mother is a poet and her dad an engineer. She isn’t famous. She lives nowhere special. She has no advantage. She has no “connections.”

When she was a little girl she liked to sing and act in local theater, reading Kurt Vonnegut by age twelve and spending her time writing lyrics. A recording of her performing at a talent show ends up on the desk of a music scout. She gets hooked up with a producer in New Zealand. She writes some more songs and posts them on the Internet. They go viral. She tops the U.S. Billboard charts—the first New Zealander in history. She becomes an international celebrity and wins the Grammys.

She wrote her top song “Royals” when she was only 15. She’s now 17 and she’s everywhere, topping the charts and beating out the biggest names in pop music. Her story demonstrates the truth: anyone can achieve their goals. Anyone. Not by any miracle or hope, but by willing to be yourself and being willing to do what you love.

She wasn’t discovered by some music industry executive who packaged her in cellophane, anointed her as one of the chosen pretty people and then presented her to the world. No, she was just really good at what she did and the world discovered her. The rest is history.

And that’s the truth. In March of 2013 the then sixteen-year-old New Zealander posted her song “Royals” on the internet music site, Spotify. In April 2013 she was added to the influential playlist, Hipster International. The playlist followers loved her and she went viral. By May she was topping Spotify’s Viral Chart and attracting the attention of record company Lava Records. She was getting traditional radio play by June and by July “Royals” had cracked the Billboard Top 100. By October she had the number one song in the United States for nine consecutive weeks, making her an international star.

She’s a good singer. She’s a great songwriter. But, above all, she’s an artist. And she’s herself. In seven months she went from nowhere to everywhere. No one gave this to her. She made it.

An unknown kid from New Zealand skyrocketing to international fame and winning the Grammys less than a year after she releases a song on the Internet—setting international records and making history in the process? Yeah right. In your delusionally optimistic rags-to-riches-give-it-up-before-you-waste-your-life dreams.

Yet, it happened. Crazy, eh?

Life is cool. Existence is wild. Stuff is possible.